As per statistics on 31st March 2020, the global coronavirus cases have touched 884,921 (worldometers.info). It all started on 31st December 2019 when WHO China was informed of cases of pneumonia because of an unknown cause. The total number of reported cases reached 44 on 3rd January 2020 and on 7th January 2020, Chinese authorities identified a new type of virus, the coronavirus. On 20th January 2020, China reported 278 confirmed cases and 6 deaths from the city of Wuhan, the epicenter of the pandemic, home to 11 million inhabitants. The evacuation process spread the virus to many people from China to various countries. 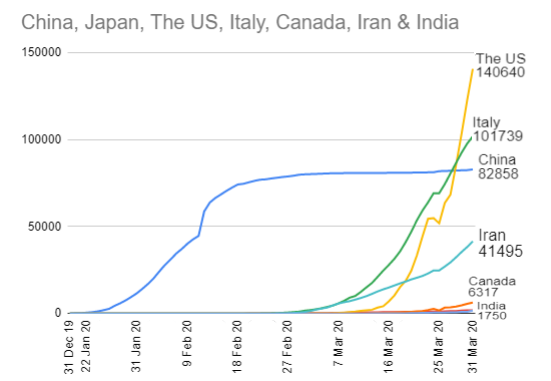 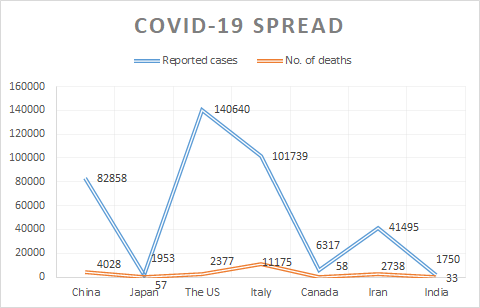 A look at date wise charts to show the spread of Coronavirus in China, Italy, Iran & the US, the top countries of the major outbreak is represented in the charts below 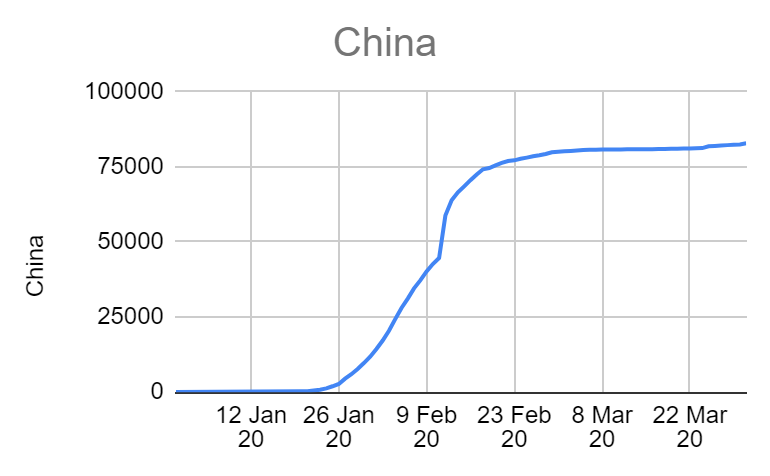 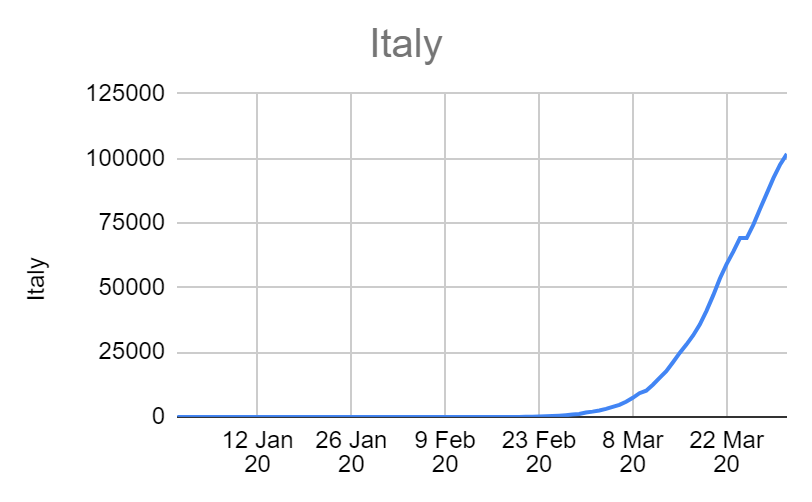 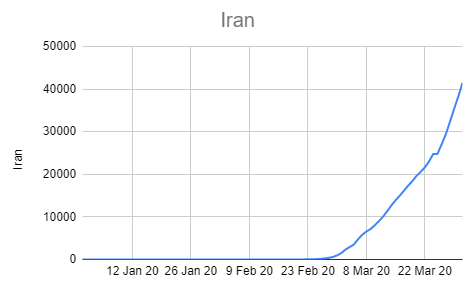 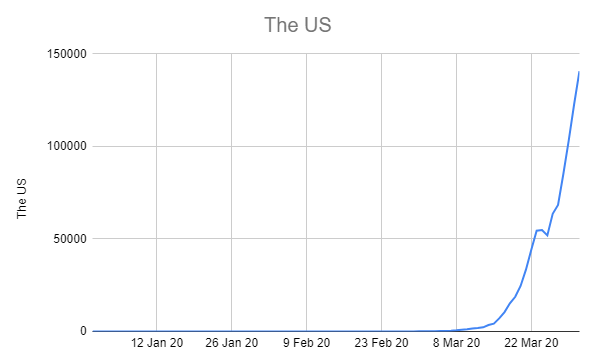 The article throws light on the jump from stage 1 of the virus spread where the cases are imported from affected countries to stage 2 where local transmission happens to stage 3 of community transmission.  Stage 4 has clusters of infection, China has been in stage 4.

The graphs represent the spread of the virus since its first outbreak in the respective countries. While the first outbreak in China happened on 31st December 2019, Italy reported its 1st on 31st January 2020 & Iran on 19th February 2020. The outburst in the four countries is much more compared to the other countries. While in China the spread was increasing twofold every second day, Italy faced a rise in almost 2 weeks of the outbreak. If the dates are to be analyzed, the outbreak in Italy happened very late after the outbreak in China but the increase in the number of cases reported is similar to China. Even in the US, the number of reported coronavirus cases is shockingly huge in two months of its outbreak currently standing at 189,612.  But the majority of the countries reported as low as 2 positive cases in stage 1 of coronavirus pandemic. Stage 1 indicates the stage where the infection is only limited to those who have traveled to virus hit countries and have tested positive.

As China grappled with the pandemic outbreak that seemed out of control, it seems to be leveling off in a matter of 2 months. 15th March 2020 marked a statistical milestone date when confirmed cases of COVID-19 outside of China surpassed the Chinese total.

A detailed day-wise study for 2 months, of the number of reported cases, in a few selected countries including India, shown below to better understand how countries are fighting against the virus spread:

The table above describes the spread recorded in a timeline of 5 days to do a comparative study to better understand the flow of the virus. For each of the countries, day 1 may vary depending on the date of the outbreak.

China reported the highest number of cases on the very first day of the coronavirus outbreak whereas other countries reported a maximum of 1-2 cases each. Other than China, where it all started, the rest of the cases were imported into the countries through an already infected carrier. Iran shows the highest rise in the number of reported cases in 10 days to 388 as compared to any other country.  China the epicenter of the pandemic shows a rise in the number of cases to 278 after 20 days.

Italy saw a steady increase in the number of cases but after a month the numbers jumped to a whopping 2000. Since then the number has been alarmingly increasing in the country and stood at 10149 at day 40. Reason?? No early measures to contain the spread or isolate the virus or limit the movement of the people. After China, Iran is the most affected as the numbers increased to an exploding 14991 on day 50 from 4747 on day 40.

Almost a month after Iran got hit by the pandemic, the number of reported cases reached 24811, almost touching the US’ number at day 60. Even after observing Italy’s situation, Iran failed to take early steps to control the virus spread. The number of officially reported cases has doubled almost daily and at least 3,036 people have now died, according to the latest official figures. As per sources, the officials tried to hide the outbreak of the virus to the country by stating that it’s like normal flu.

While the impact of the novel coronavirus has been the most in China and Italy, India also is within its grasp.  India reported the first case on 30th January 2020 in Kerala. The government has announced a 21-day lockdown until April 14, 2020, identified 20 existing and 22 potential hotspots to prevent the widespread transmission. The epidemic has expanded its footprint in the country, affecting 1,347 people till 31st March 2020 and the trajectory of the disease is going to be unclear. 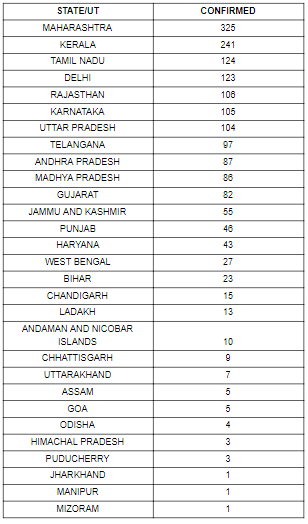 Maharashtra and Kerala reported the highest numbers of coronavirus cases with 325 & 241 respectively. Even before the Government announced the complete lockdown, many states in India have already implemented a state-level lockdown to curb the numbers, sealing their borders from their neighboring states to ban all kinds of transportations. As per reports, India is at stage 2 of the COVID-19 outbreak even after two months of its first case reported.

In the US, where the numbers are overwhelmingly increasing at the rate of 1000s every 5th day, reported cases as of 31st March 2020 stood at 140640. President Donal Trump is endorsing the end to coronavirus social distancing soon and announced in a news conference that “America will again — and soon — be open for business,”. In developed countries like the US which has 2.8 hospital beds per 1,000 people, at a 10% hospitalization rate, all hospital beds in the U.S. are predicted to be filled by 10th May 2020. If 20% of cases require hospitalization, there are chances that the US might run out of beds by May 4. Deaths have been in devastating numbers mostly because of unpreparedness for the pandemic followed by a limited number of doctors operating per infected person & lack of medical treatments.

Because of the inverse relationship between the number of infectees & medical facilities including the number of doctors, nurses, medicines the death rates are also increasing globally. The graph below is a comparative death analysis among several countries like China, Japan, The US, Italy, Canada, Iran & India.

China has seen great losses in human lives right from the beginning of the outbreak by approx. 3,287. Italy surpassed the death rates of China in two months of the outbreak in the country by 7,503. The US has also crossed 2000 deaths as on 31st March 2020 followed by Iran witnessing 222 deaths as on the same date. Countries like Canada & India have experienced 58 & 33 deaths respectively. In China, where the population is approx 1,427,647,786 the death rate is comparatively invincible than the countries like the US, Italy & Iran which has a population of 327,096,265, 60,627,291 & 81,800,188 respectively. Whereas India whose population is 1,352,642,280 almost equivalent to China, the death rate is considerably lower than all the countries listed above (Source: https://en.wikipedia.org/wiki/World_population).

This leads to a very interesting question. Was China already prepared for this pandemic ever since its reporting in Wuhan? Or China is internally fighting this virus without letting the information come out of the country?

As China prepared itself as the virus started rolling, they started constructing makeshift medical facilities on 24th January 2020 with 1,000 beds that became operational on 3rd February 2020. There are a lot of speculations building around this sudden fall in the death rate in China while the numbers are increasing rigorously in other countries.

The mishandling by the government of China on the coronavirus outbreak that began in Wuhan province by initially trying to cover it up. They started detaining the doctors who raised early alarm bells to make other countries aware of the spread of the pandemic. But now, as cases within its own borders begin to rise, Beijing is shipping sorely needed medical supplies and their doctors worldwide, including to Italy and Iran, two of the countries hit hardest by the virus outside of China.

In these three months since the virus began its deadly spread, China, Europe, and the United States have all set off at a sprint to become the first country to produce a coronavirus vaccine. The World Health Organization officials say they are working with scientists across the globe on at least 20 different coronavirus vaccines with some already in clinical trials in record time.

Countries like China & the US are using advanced AI to help diagnose the disease and accelerate the development of a vaccine. AI is also being used as a surveillance system to keep a tab on infected individuals and enforce quarantines. Tech companies across the globe are implementing AI to track the virus & predict the outbreaks to process healthcare claims. AI-powered chatbots are also being used to deliver real-time information about the coronavirus pandemic. AI is learning every implementation during this hard time to aid research and vaccination.

Note: The numbers of reported cases & the number of deaths are subject to variation depending on the numbers reported.